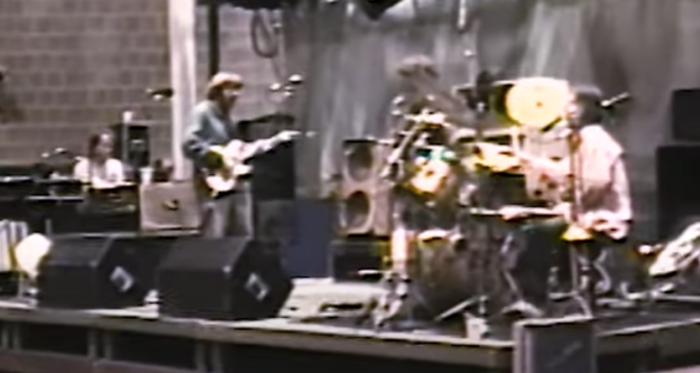 Yesterday, Apr. 1, Reelife Productions premiered footage of Phish’s soundcheck at their Dec. 7, 1990 gig at Hampshire College in Amherst, Mass. The video shows the band performing a song called “The Pendulum,” which, according to fan-run database Phish.net, was only performed twice in the band’s career.

Interestingly, the last known time that Phish performed the song during an actual show was on Apr. 1, 1986. It was debuted on Feb. 3 of that year at Hunt’s in Burlington, Vt. The song is actually backing music for poetry by Zenzilé Madikinea, who attended Goddard College along with Phish around that time.

“Once upon a time, Phish played backing music while Zenzilé Madikinea recited revolutionary poetry,” reads Phish.net’s song history of “The Pendulum.” “Zenzilé studied at Goddard briefly around this time, having been a revolutionary and ‘troublemaker’ in South Africa as a young adult. Zenzilé rallied extensive support for various civil rights causes, urged on by his innate dissatisfaction with the heinous state of the world, always electrifying his supporters with eloquent speech and cadence.”

According to the song history, the second performance on April Fools Day 1986 was sans Zenzilé; that night, the band moved from the rarity to “Dave’s Energy Guide” followed by “Icculus.”

Interestingly, while the song has not been performed in years, it hasn’t necessarily left the mind of guitarist Trey Anastasio.

“It seems Zenzilé did have a lasting impact on Phish, or at least Trey,” reads the history. “Over twenty-three years later, during the soundcheck from the 8/14/09 Hartford show (available as a free track from livephish.com), Trey can be heard quoting part of ‘The Pendulum.’ Who knows why those obscure lines ended up in Trey’s head in 2009, but what song did they bust out later that night? That’s right, ‘Icculus.'”

Reelife Productions noted in the description of the video that “other unreleased material from this 12/7/90 Hampshire College Recording [is] slated for future release, in a format as of yet to be determined.” Watch the video of “The Pendulum” below.