Matisyahu: Shining in the Darkness 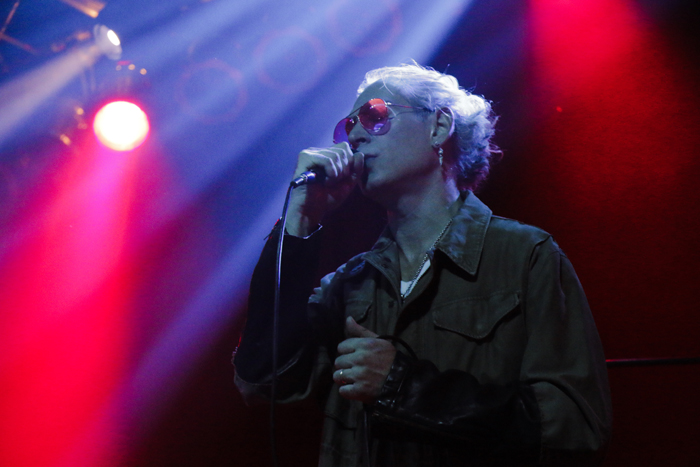 On Dec. 10, 11 and 17, Matisyahu will perform his ‘Festival of Light’ shows, livestreamed from the historic Capitol Theatre in Port Chester, N.Y., marking his first full-band performances since Purim in late February 2020.

Performing on and around Hanukkah holds a special place in Matis’ heart, as his “first real gig” in Brooklyn was a Hanukkah show at Southpaw. His ‘Festival of Light’ shows have grown from that, first into a New York City residency, then into a short tour. Now, the shows will once again take on a different format, performed in an empty venue with no audience. However, while he would certainly prefer if an audience could attend, Matisyahu finds that this setup will be fitting for the holiday and for the current moment.

“With just tons and tons of anxiety and darkness all around us, you find this whole concept of huddling around this menorah in your home,” he says. “It’s not a massive thing, it’s not a super big shiny thing, it’s something very humble and pure. And to huddle around that and find the light in those times when there’s this heavy darkness that’s just all around you–to me, that’s the main idea of Hanukkah. And I feel that that’s what we’re gonna be doing on the stage.”

In our conversation below, which came shortly after Matisyahu and his keyboardist Rob Marscher mapped out the setlists for each night, we discussed more on how this year’s ‘Festival of Light’ fits into Matis’ view of Hanukkah, as well as new music he has been working on at home, spending time with family and more.

We haven’t really talked to you since quarantine has been going on. Prior to Festival of Lights, how have you been spending your quarantine? What have you been maybe, appreciating about things you’ve been able to do, and what has been hard about it?

Well, the first thing that happened during COVID was, having a bunch of recording sessions set up at the house, and I got one of them squeezed in right before COVID hit in February. And then my daughter was born, in a home birth, in March.

Thank you, man! Esti River. We live right here on the Hudson River, and she was born right here so it was pretty amazing. I guess you could say that, for the first time, really–I mean, I’ve had always time with my kids. I have five kids now, she’s my fifth. But to have the amount of time home, with no distractions, with my baby–has been just pretty amazing. And then other than that, I’ve been recording music. It gives me a lot of time to write lyrics and get into that writing space which was where I was sort of headed right before this, so it kind of actually lended itself to that as well. I think every other album I’ve done has–even when I’m taking time off to do an album–oftentimes, there’s been shows, and work that I just needed to take, in order to just keep everything going.

The albums have always been made amidst touring from the very first album. I mean, Youth was made in the midst of tours. So this is literally the first album that I’ve been able to sit still and fully focus. And because I’m doing it in the home studio, and it’s just been really nice. So that’s been great. Other than that, it sort of reminds me, in a way, of the whole process I went through when I shaved. I was sort of getting rid of all the extraneous forces in my life. I’ve sort of been in a process of doing that actually for some time. Just trying to focus in on, what are the core elements, and devote all the energy to those elements. And then COVID is kind of like that, times ten. We’re being forced to do that. So for me, it hasn’t been a huge shock to the system because I’ve sort of been on that trip, for a little bit.

I think that some good things have come out of it for myself. I’m just trying to stay safe, just stay healthy. And it’s just horrible obviously, just trying to make it through, but it’s horrible what so many people have gone through with that. I’m just counting my blessings right now.

Well I guess one of the ways you’re able to connect with others is through the upcoming Festival of Lights performances. You grew up pretty nearby The Capitol Theatre, so I just wanted to hear a little about what went into the decision to have these shows there.

Well it’s actually a combination of things. I mean, like you said, The Capitol Theatre is sort of like my go-to place if I’m gonna go see music because I live in Nyack now, and I grew up in White Plains. So it’s just the home turf right there. When Peter [Shapiro] came back in, redid The Cap, and brought it back to life–it’s just an amazing thing for us, in a very, sort of personal way. Separate from the whole industry, the whole being on tour, the business of it, the work of it, and everything, wrapped up with Matisyahu.

I know when I’m home, coming back from tour, I’m always checking to see like, “Oh, this band is playing, I want to see them,” and I can always go there and just be totally chill. No one will mess with me, a couple people will say hi, and that’s it. It’s just awesome, and I’ve been playing shows there since they reopened. We’ve often times played these important shows, which were “homecoming” type shows that I’ve done there, and then Pete’s a great friend. The way it actually happened was like, my manager and I were talking about trying to do these shows and trying to figure out where the best place to be is. And literally on that day, Pete texted me and he’s like, “Dude, Happy Hanukkah!” and I’m like, that’s it. We’ve got to do it at The Capitol. And then boom boom boom, that’s how it went down.

It’s nice when it goes like that with real relationships. I’m stoked man. Obviously it’s not a hometown show in the sense that all my friends and family are going to be there, but it still feels like when you get in your car and you drive 12 minutes away. It feels like home.

Yeah, that’s awesome. And I’m sure feeling at home will be good, considering performing with no audience might be somewhat eerie.

You know what? I’ve been thinking about it before, because honestly when COVID started, I kind of made the decision to try and not do too many virtual types of shows. I think they’re great, and it’s great that I’ve been able to do some, but I just didn’t want to go overboard with it. So we only did a couple. I was looking at these pictures of bands playing in these big, empty arenas, and stadiums, and all kinds of stuff. And I was like, I don’t really get it. My thoughts now, as I’m getting closer to the show, I’m starting to think about what it’s going to be like. It seems like it’s gonna be kind of freeing and awesome, just having the theater to yourself, and being able to play.

It’s like when you play on TV. We’ve done a lot of late night TV shows and stuff, and there’s 100 people there or something. The energy is so different from playing a show, even knowing that there are people watching. But I’ll tell you the truth, I was speaking to Rob Marscher, the keyboard player, this morning, and we were talking about it and I was like, oftentimes, the lights are shining in your eyes. You’re playing in a festival with 20,000 people there, but you really can’t see anyone’s face. You’re in the darkness on stage, and you’re just with your band. And as a frontman that’s always weird, because you’re supposed to be bridging the gap between the audience and the band. So to me, this is right up my alley because I often keep my eyes closed and just jump into my own world: the world of the band and stuff. So I feel like it’s gonna kind of be very natural actually. Kind of like, no pressure since the wrong type of pressure won’t be there.

Right. To me it kind of seems almost like a rehearsal vibe where, like you were mentioning, you and the band are the only ones there. So you can really explore the musical space, without the pressure of worrying like, “Oh, how big was that cheer?” or “What song do the fans want to hear?” You can totally craft your own experience, which is cool.

Exactly, yeah! I mean, I think that that’s going to be an interesting balance because you don’t want it to feel too chill because it’s not. It’s live, and it’s happening right there! There’s probably more people there than would be at an actual show. But at the same time, I think naturally it’s gonna feel pretty at home which I guess is the vibe. That’s what this year is all about, right?

Yeah, definitely. At least the way that I celebrate Hanukkah, it’s a very familial, home-based holiday. Like lighting the menorah is personal and intimate. So perhaps these shows will fit nicely into that sort of celebration.

I think so, I think you’re right there because Hanukkah has to be done in the home. The menorah is lit in the home. And it’s not like Purim, for example, where you got out to hear the Megillah. Or Simchat Torah, where you go out and dance with the Torah. Hanukkah is definitely a home type of theme, and it kind of makes sense. It feels right. Everyone huddled around the menorah in the darkest time.

Yeah, definitely. You mentioned Rob Marscher, who else will be playing with you for the show?

I have a great line-up. I mean, I’m so excited, literally to be playing music again. It’s the first time that I’ll be playing with the band, like full on, going for it. It’s Tim Keiper, drummer, who, before COVID, finished up on Broadway with David Byrne. Then, Rob Marscher on keys. Aaron Dugan has been my guitar player since Live at Stubb’s, back from the New School in college. And finally Jason Fraticelli on the bass, from Philadelphia.