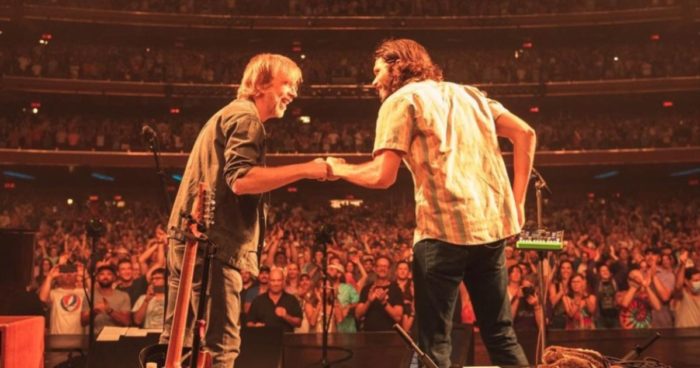 Last night’s Goose show opened with an acoustic set, which featured the group’s first known cover of Arcade Fire’s “Wake Up”–which the indie-rock icons famously played with David Bowie at Radio City in 2005–as well as Bruce Springsteen’s “Atlantic City” in the middle of a set of originals. During Goose’s set second, Father John Misty emerged to help Goose through his own “I’m Writing a Novel.” Goose started covering the popular Fear Fun track during their creative pandemic streams in 2020 and have since added it to their repertoire. During a set-closing “Creatures,” multi-instrumentalist Peter Anspach also took a cue from Tame Impala, who he saw at Radio City according to a recent Relix cover story, and other rock acts and walked over to one of the venue’s side balconies to play during the song’s jam.

Confirming rumors that circulated all day, Anastasio joined Goose for most of their third set, which stretched until 1 am. The Phish guitarist emerged after “Silver Rising” for some of Goose’s best known originals, sitting in on “Hungersite,” “Arcadia,” “Dripfield,” “Loose Ends” and “The Empress of Organos.” Then, for the night’s encore, Anastasio and Tillman returned for a take on The Beatles’ “Tomorrow Never Knows.” Tillman, who played drums in Fleet Foxes early on, opted to sit behind the kit for the selection.

Goose will perform at High Sierra on June 30.

Watch a pro shot video of Anastasio and Goose below: