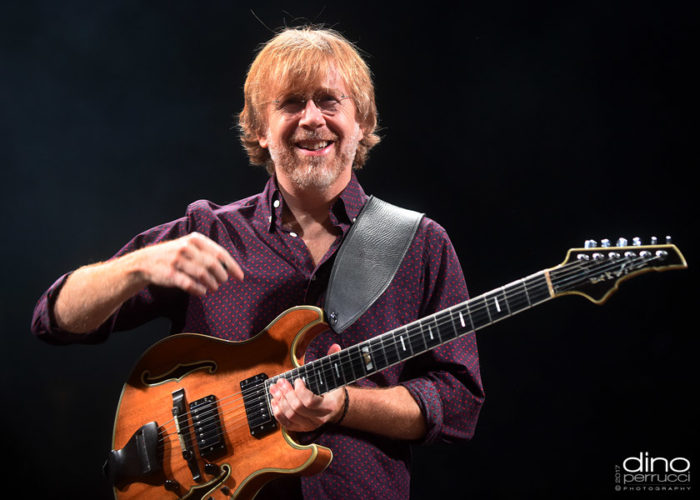 As a part of Jam On’s “Ask Trey” program on Sirius XM, Phish frontman Trey Anastasio recently gave fans a glimpse into the preparation he goes through for each and every show.

Part of Anastasio’s daily rituals includes reading the entire Phish songlist and chatting with his bandmates about potential songs for that evening. However, he’s quick to note that nothing is set in stone until showtime.

“We walk onstage without a songlist because I don’t think the decision can be made without the introduction of the audience energy,” he explains.

In a particularly vulnerable moment, Anastasio answers a question about the relationship between Phish shows and his own spiritual practice.

“Phish shows are completely wrapped up into my spiritual life at this point. Especially since becoming sober almost 12 years ago,” he says.

A bit later, the guitarist describes his moments of deep self-reflection before a show.

“I meditate and then I do my vocal warm-up and then I go in the bathroom and I always kind of kneel down in front of the toilet. And there’s a reason that I do that. Because I used to drink too much and it put me in front of that toilet and I like to remind myself how grateful I am that today I haven’t had to do that, in 12 years. That’s a powerful thing to me. And then, I do the St. Francis prayer. And then I try to do the ‘we’ version of the St. Francis prayer… I think of the town we’re in and I try to picture it from above and all the people in it and everybody who isn’t in the venue surrounding to try and get some perspective. And then I think about the venue from above so that I’m reminded that it’s really small. Even if it’s an arena or something, in the scheme of things it’s very, very, very, very small and it’s a gathering of people. And then I get up – the last thing I do before I walk on stage – and I open the door, and I let God out. And I walk out afterwards. I do that every night.”

The Phish frontman also notes that during this ritual he prefers to avoid mirrors. At first he laughs that it’s because he doesn’t want to overthink his wardrobe choice, but he also admits that his reasoning goes far deeper. “I don’t want to be the center of attention,” he says. “I want to be part of a group and part of a community.”

Anastasio says the final thing he does to center himself is think of the members of the audience.

“I also have to admit that I often think about whether there’s somebody in the audience who’s trying to get sober. I kind of try to tell myself that’s enough for me – to be in unity with that person in the back row. It doesn’t have to be a good show or a bad show, just standing there not behaving the way I used to 13 years ago is enough of a gift for me. And that usually gets me up to the middle of the stage in the right head space.”

Phish Radio on Jam On will stretch from Monday, Dec. 24 through the band’s New Year’s run at Madison Square Garden (Dec. 28-Dec. 31).

Tune in to Sirius XM channel 29 for more information.