Todd Snider: Reflections from a “Force of Nature” 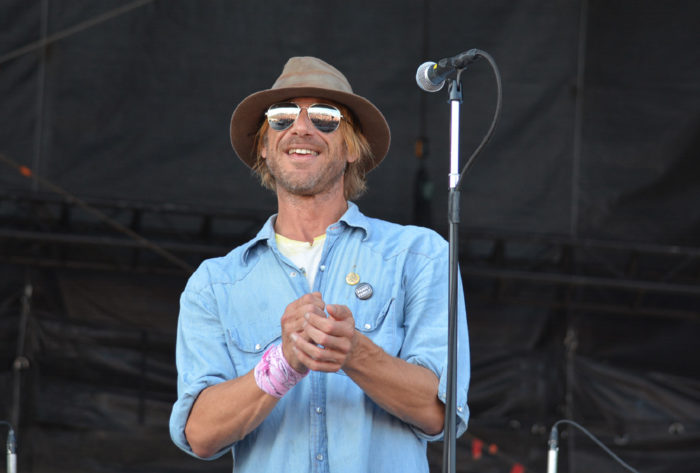 It’s a three “C” morning for Todd Snider — coffee, composing and cannabis – as we discuss the other letter “C”-related items in his life — his current album titled “Cash Cabin Sessions Vol. 3,” recorded at Cash Cabin Studio, which was previously used by Johnny Cash and now run by his son, John Carter Cash.

The solo album finds the singer-songwriter returning to his folk roots following 2016’s Eastside Bulldog and two albums as frontman with jamband supergroup Hard Working Americans (HWA). Snider recorded all the instruments, mainly guitar and harmonica, for this release and is joined on backing vocals by friends Jason Isbell and Amanda Shires. He gets political on “Talking Reality Television Blues,” exhibits a touch of sentimentality on the changing world during “Just Like Overnight” and honors the inspiration of his HWA band members on “Like a Force of Nature.”

The album is the culmination of a recurring dream Snider had that involved The Man in Black after he first visited Cash Cabin Studio to record with Loretta Lynn. That led to a hallucinatory excursion on the studio’s grounds before recording there with his Americans bandmates. He relates a glimpse of his dream in the Cash Cabin track, “The Ghost of Johnny Cash.”

It’s through the days and nights, weeks, months and, sometimes, years of working on a song that Snider’s thoughts have the opportunity to be shaped, edited and, then, edited some more into his engrossing and engaging storyteller material. During a conversation he doesn’t have that luxury and admittedly rambles in a manner that eventually gets to a particular point or trails off to a thought that never quite coalesces into concrete form. In spite of this his affable stoner charm makes talking with him a delight that demands a little extra care in relating the experience while maintaining the atmosphere of our time together.

He discussed the songs that make up Cash Cabin Sessions, Vol. 3 with frequent references to his involvement with Hard Working Americans as well as his tribute to Col. Bruce Hampton and the video of him playing for a longtime friend after she received cochlear ear implants.

When I brought up that I didn’t expect him to be up so early in the morning for the scheduled interview, Snider brought up how he keeps musician’s sleeping hours which entails a few hours of rest here and there but rarely a full eight hours at once.

[This previously unpublished interview took place back in August, prior to the death of Neil Casal as well as the recent passing of John Prine.]

JPG: Did you work on any songs today?

JPG: As a writer, I, sometimes, have to remind myself that what comes out is a draft and don’t get down on myself if it’s not perfect or coherent from the very beginning.

TS: Yeah. If I made up a line today, it’ll be a few months before I will realize that it may be part of the song I’m working on.

JPG: Is that something that you had to learn over time or is it just the understanding that you need to be patient as a songwriter?

TS: Yeah. There was this guy in San Marcos who passed away about five years ago named Kent Finlay and he owned a songwriter honky tonk kind of place in San Marcos, Texas that was very very close to Austin. If you played this bar, it’s considered playing Austin essentially but it’s on the far outskirts. They would have bands like the Fabulous Thunderbirds – this is my day, the ‘80s – and you could put about 300 people in there. But on Tuesdays they would have songwriter nights. You could do three songs and no one was allowed to talk. This guy that ran it, Kent Finlay, it was like a circle, and he was the leader. And when I got there I was on what you call the Sofa Circuit, sleeping with friends….My family lived in Austin, my dad did anyway.

So, I had three songs and I went there. On the very first night he thought I was like John Prine and I hadn’t heard of John Prine. Then, he said you’d like Kris Kristofferson and I thought that he was an actor. He invited me to his house and there was this after-circle.

And in the ‘80s,  James McMurtry or Hal Ketchum or Bruce Robison, those guys would say, “Snider, that’s an exaggeration.” And it is a vast exaggeration but this Kent Finlay who only really had a few handful of songs was very Dave Schools-like in his ability to understand intention…I’m really rambling now but it’s true. Everybody really gravitated to him for that element of it. And he took care of anybody with a song. And he let me stay at his house for a summer or so and really taught me the thing that I do, the way I make up songs I learned from that guy. His thinking was it’s got to be a few hours every day, and most days you’re not gonna get anything. It turns into a habit, like the coffee/weed songs…

JPG: That brings up this because you hadn’t heard of John Prine before that…

JPG: …so before that were you always a storyteller and that musical format suited you? Then, you discovered John Prine, Jerry Jeff Walker, Townes Van Zandt and others. You knew you were on the right path by seeing others who did that.

Then, I saw Jerry Jeff Walker play at Gruene Hall and it was…the difference between a freeloader and a free spirit is three chords. My first thought was, “Who’s not gonna want me on their sofa if I can play a few songs?” I could go make up some songs and I live like he’s singing about, rambling and scrambling and being a gypsy and being free. I’m like, “I got that going on all day everyday. I could be rhyming that just like this guy is.”

That seemed to me like if you’re aimless, it’s so much easier with a guitar. And then, pretty quick I would sing at the open mics and stuff and it just started to work out that I didn’t have to work in other ways. Then, I met that guy (Kent Finlay) and felt passionate about it and got into more than just getting by. All of a sudden, for no good reason I wanted to make a song as good as “[Me and] Bobby McGee” and still do. And I’ve already accepted that I won’t.

TS: (slight laugh) It does get you up in the morning with something to do.

JPG: Maybe you’re already there and you just don’t realize it because you can be your own worst critic.

TS: I hope so, but you never know. There’s a couple that I like. Well…I like my songs. All of them are true. I never did any of them for any other reason. Some of them people like better than others.

TS: Right (laughs) I’m one of them, actually.

JPG: Since we’re discussing songwriting that segues to Cash Cabin Sessions, Vol. 3. Some of the songs sound as if they’ve been worked out but then there’s “Timeless Response to Current Events,” “Talking Reality Television Blues” and a couple others that sound off the cuff. Is that just your style and that’s the way I’m hearing it?

JPG: They do sound as if you said, “Hit record” and you just come up with stuff.

TS: (laughs) And just ramble. I made one record, Eastside Bulldog, where I, for the most part did that, just let it out, but the rest is more like chiseling away. Like, I think I’m Hunter Thompson or something and then going, “Oh yeah. I’m supposed to be singing.”

I have weird songs, sometimes. “Ballad of the Kingsmen” reminds me of the two we’re talking about. Those take a couple of years, it seems.

JPG: Is it compliment to say that it sounds as if you’re just riffing off the top your head or is it an insult since you put so much work into it?

TS: Part of what you’re working on is hoping that it feels conversational.

JPG: You do have that element about you, of being a storyteller, of having a conversation that’s done in a song format.

TS: I feel like the talking and those songs, those two in particular, part of what goes into with the group I got into, Hard Working Americans, is to try to get out of that place that’s more improv.

JPG: Can you elaborate on how “Like a Force of Nature” is influenced by Dave Schools.

TS: I started making it up for him, and it could be about all of ‘em [in Hard Working Americans] and how much that whole thing for me, what a force of nature that group can be like when it’s together.

The main thing I wanted from getting into that group was to be a better folk singer. Better is such an arbitrary word but I wanted to grow and find ways…I still learn a lot from that group.

JPG: From the press release, “Snider discusses his folk music journey stemming from the teachings of Dave Schools in their original jam band. In his single/album, Snider explores the concepts of “intention, passion, and absurdity and things you could apply to anything…””

TS: (laughs) That’s what I was just trying to say. And Duane [Trucks] and Dave have studied under Col. Bruce Hampton

JPG: Now, being a singer-songwriter can be a tightly-structured format whereas with them it’s more open.

TS: Yeah. That’s what I like. I’m more of a stoner, hippie type maybe than I am a singer. But then, I have this idea of a better folk singer that I’m always trying to be.

JPG: Did it take being in that band to finally admit that you’re a stoner hippie at heart?

TS: For sure! Well, I guess I’ve always admitted that but it felt for sure…the hardest part of a person who makes songs, you don’t get to really do it because you want to. It happens and you’re there, ready for it. If you put yourself someplace new, it might happen. If you go on a new adventure, if you get in a car with someone that you don’t know because they said, “Get in,” it might happen. So, I’m mostly trying to put myself someplace.