Billy & The Kids at Red Rocks 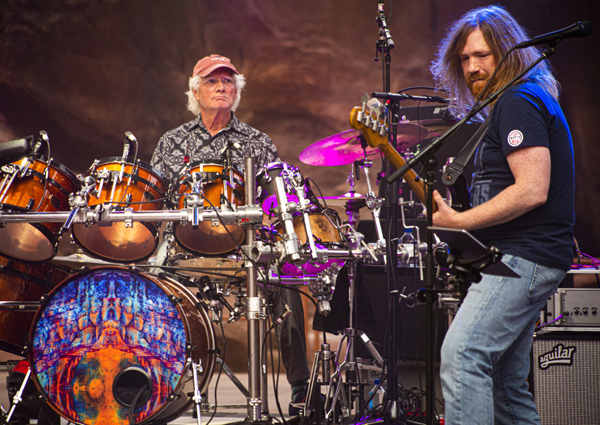 On Monday night, founding Grateful Dead drummer Bill Kreutzmann brought his youthful group of “kids” to Red Rocks Amphitheater in Morrison, Colorado for the first of their two highly anticipated shows following their fan-less performances in Hawaii in May. The streamed events for Kreutzmann’s 75th birthday showcased locked-in and fiery takes on Grateful Dead and JGB classics as well as other choice covers.

Typically featuring a lineup of Kreutzmann on drums, JRAD’s Tom Hamilton on guitar, Electric Beethoven’s Reed Mathis on bass, and Aron Magner of the Disco Biscuits on keys, these shows also included several revered guests as well. Bill’s newest honorary kids included being joined by bluegrass sensation Billy Strings on guitar and vocals as well as James Casey of the Trey Anastasio Band on sax and vocals.

The group came out of the gates firing on all cylinders, beginning the show with a rocking “China Cat Sunflower” and transitioning right into the Hawaii-debuted “Thunder.” The latter song was written by the infamous Grateful Dead lyricist, Robert Hunter, and Kreutzmann charged Billy Strings with composing the accompanying music.

“Brown Eyed Women” came next before sax player James Casey got his first chance to shine on vocals on “Ain’t No Bread In The Breadbox,” before the group transitioned smoothly into a rollicking cover of Phish’s “Back on the Train.” Strings lead the group in this uptempo cover that set the crowd reeling.

The sextet selected “Deal” next, which was followed by Strings taking on a heartfelt “Positively 4th Street,” a Bob Dylan song often covered by JGB. Strings’ voice was a perfect for this song, and left the crowd with palpable collective goosebumps.

Aron Magner capped off the first set with the Weir-sung tune “Feel Like a Stranger.” This was the perfect song to close out an incredible first set, and really allowed Magner to open up on keys as his gravelly vocals evoked an amalgamation of Bob Weir & Brent Mydland’s voices.

The group returned for set two ready for action and wasting no time getting down to business. The group began the set with a ripping “Scarlet Begonias” > JGB’s classic cover of Jimmy Cliff’s “Sitting in Limbo” before launching into an extended 17+ minute take on the universally adored “Eyes of the World.”

From there, the group lit into “Bird Song” before transitioning into a dark and fiery “The Other One,” before reprising the conclusion of “Bird Song.” After this run, the group took a momentary breather before Billy Strings brought the house down with an emotionally-charged take on fan-favorite “So Many Roads.”

The group closed out set two with “Wake Up Little Suzy” before the encore break, and then saw Kreutzmann return to the stage alongside some additional special guests. Bill was joined on an additional drumset by Thievery Corporation’s Jeff Franca and also featured percussionist Jason Hann from the String Cheese Incident joining him on stage for the Rhythm Devil’s iconic “Drums” section before being joined by the rest of the group.

The now 8-piece group closed out the evening with incredible takes on “Fire on the Mountain,” and “US Blues” before bidding their farewell and leaving those in attendance floored. As the fans made their way out the venue, many high fives were exchanged as others speculated on what the group would play the next night with great anticipation.

One thing was certain, though. This group is one of the most exciting incarnations of the Grateful Dead family, and those who managed to be in attendance for these shows are incredibly lucky to experience such heights of musical ecstasy.

Set One (74:59): China Cat Sunflower > Thunder, Brown Eyed Women, Ain’t No Bread in the Breadbox > Back on the Train, Deal, Positively 4th Street, Feel Like a Stranger

Set Two (95:09): Scarlet Begonias > Sitting in Limbo, Eyes of the World > Bird Song > The Other One > Bird Song, So Many Roads, Wake Up Little Suzy