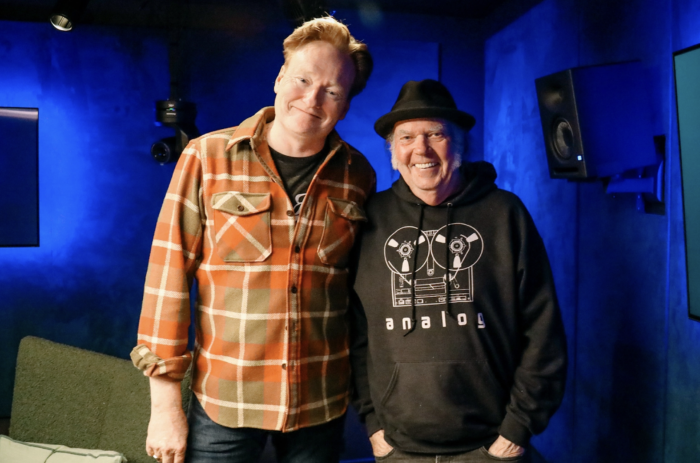 Sirius XM’s Team Coco Radio recently connected their host Conan O’Brien with Neil Young to chat about the latter’s history of appearances on television. Together they looked back on his cameo on Mannix and appearances on The Johnny Cash Show and Saturday Night Live.

Over the past few decades, Young and O’Brien have crossed paths on late-night talk shows. The resulting comfortable cadence and contentment between the two are apparent throughout the hour-long conversation that will air today on SiriusXM.

Their talk explored several of Young’s TV appearances and started with a look back on a short cameo Young had with Buffalo Springfield in an episode of the CBS show Mannix, which aired in 1967. “Our managers thought this was a great opportunity to move into television,” Young shared. “I don’t think we even looked at it. We just kept going.” In total, the band were on screen for just five seconds.

As the conversation went on, Young explained a much more impactful TV appearance when he performed “The Needle and the Damage Done” and “Journey Through The Past.”

“You gotta realize, I’m 23 years old, and I’m going on a television show,” Young explained to O’Brien. “I was petrified. I was thinking about the song I was going to sing and whether I was going to screw up or not. That’s all I thought about. I don’t really remember much else about it.” O’Brien went on to ask about Young’s choice to perform Cash’s own song “Ballad of a Teenage Queen” and his inclinations as a storyteller.

Despite the fuzzy memory due to time or overstimulation, O’Brien and Young both recall when he performed on Saturday Night Live in September of 1989. Young performed “Rockin’ In The Free World” for the show’s musical segment, which has remained a staple of American culture and music. During the performance, Young was joined by Steve Jordan on drums, Charlie Drayton on bass, and Frank “Poncho” Sampedro, a member of Crazy Horse, on guitar. At the time of the performance, which many call Young’s best on television ever, a young O’Brien was writing for the show.

“Lorne Michaels has a saying that ‘television is the worst way to experience music,’” O’Brien shared with Young. ”I think he’s usually right, except something happened that night. It was transcendent and punched through the television. I’m on the floor at [Studio] 8-H. I’m a kid. I’m in my twenties. I’m watching you do that. The place, you just melted it. I think there was structural damage to 30 Rock. It’s never been quite repaired.”