Allen Woody Turns Pink Floyd A Shade of Blue (From The Archives: January 2000) 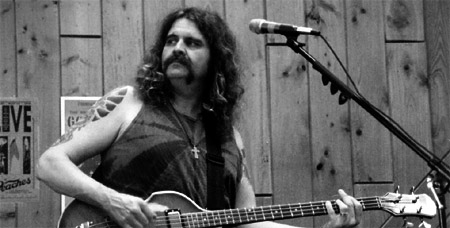 DB- How many songs are you going to bring to Blue Floyd?

AW- I don’t know. Just when I think we’ve got it, we say, “Hey, we can do this one too.” The next thing you know we’ve got another one worked up. We’re going to have a pretty wide repertoire so we can spin it around on the audiences. We don’t want it to be the same every night by any stretch.

DB- So what’s the band’s specific approach going to be?

AW- We’re going to put our own slant on this music, by giving most of these songs a more traditional blues flavor. People who are familiar with the music of Pink Floyd will obviously recognize the songs but they will be completely different from what you would expect. We’re not going to perform them in any way you’ve ever heard them before.

DB- Can you give me an example?

AW-Well for instance, we’re going to do “Money” as a blues shuffle. We’ve been rehearsing it for a few days and right now it’s one my favorite ones we have going on. “Have A Cigar” is another song that has been totally transformed. It’s radically different and really good. “Wish You Were Here” has got a nice treatment to it. But I don’t want to say much more because we want people to come out and be totally surprised by who’s playing what, who’s signing what. That’s going to be part of it all.

DB- So there are going to be vocals?

AW- Johnny Neel will be doing a lot of them. We’re hitting these things from the standpoint of playing blues and he’s tailor made to do that. Everybody’s going to sing a song or two but Johnny’s going to do the bulk of it because it is a blues project and that’s right up his alley. Johnny’s aura is one of being a true blues man. We are called Blue Floyd, and he can play the hell of out of a Hammond, and when we have occasion to use blues harp he can also play that. Plus, as I said, he’s a fine singer.

DB- So you have a few tunes that you’re going to sing yourself?

AW- Yeah but I ain’t telling (laughs). We’re going to change it every night. It’s already been a situation where the tapers have been out there on-line talking about it, so we know we have to go out and mix it up and make it good every night.

DB- So you’re taking into consideration the fact that some people might be showing up more than once?

AW- Yeah we know that, so we’re going to change it up on them. It’s certainly something that will be considered before each and every show. We know that people will be there who were there the night before and we’ve got to keep it interesting for them.

DB- Well you have a line-up that certainly is equipped to do that. You’ve already mentioned three of the players, why don’t you introduce the other two members of the band.

AW- Marc Ford will be playing guitar. What he brings to the table is being one of the hottest lead players walking around. There are all these lead players today you listen to and it’s like a bat buzzing around your head. But he plays meat. And Matt [Abts] very simply brings what I believe to be the best rock and roll drumming to a project.

DW- What would you say that you contribute?

AW- I bring a lot of nice guitars to the gig (laughs).

DB- Do you think the band’s music will appeal to some of your fans who are drawn to the blues but might not be all that enamored with the more progressive side of Pink Floyd?

AW- I think so. What you’ve got to work with are great songs. After that it’s up to the band’s interpretation of the songs. What we’re doing is playing the blues, so I think our guys would like it. I think they will appreciate our intentions which were to go out and take a body of really cool music and put a spin on it that hasn’t been done before. People should expect a great night of beautifully-written music performed by a really cool band in a format they wouldn’t expect the songs to played in. It will be a slant on Pink Floyd that you’d never thought you’d hear. What’s not to like?