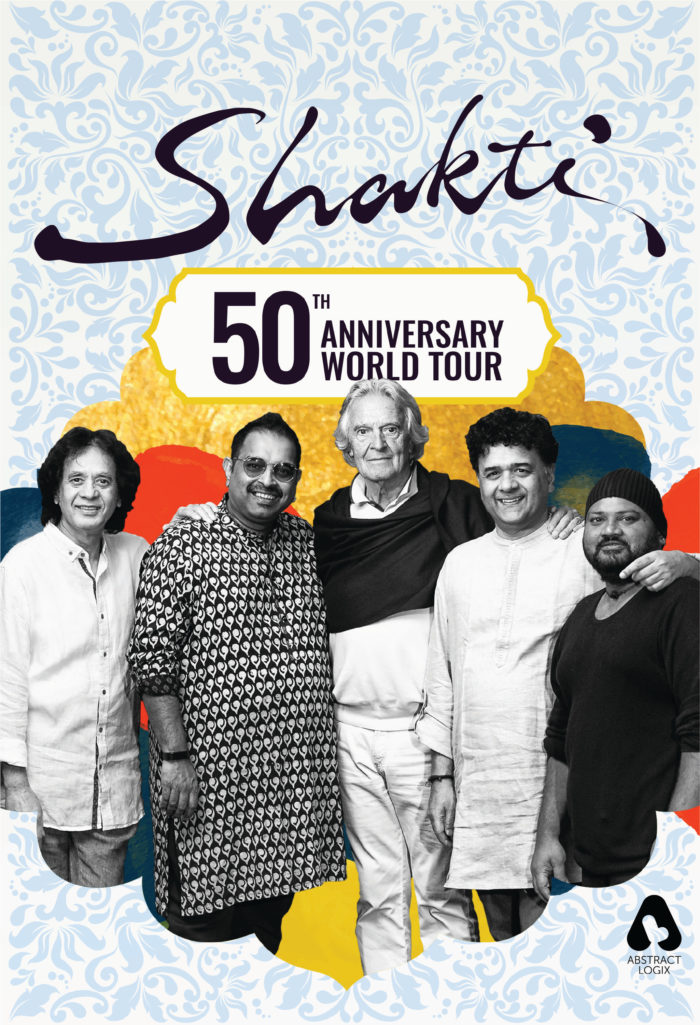 The group’s inception organically occurred in a Greenwich Village music store where Hussain gave McLaughlin lessons in Indian music which blossomed into jam sessions. Of the sessions, Hussain said, “There wasn’t a first meeting. It felt like a reunion of long-lost brothers…”

Years later, in 1973, McLaughlin stepped away from his hugely popular jazz/rock fusion ensemble Mahavishnu Orchestra to join Hussain, violinist Shankar, and ghatam player T.H. “Vikku” Vinayakram to create Shakti. “It was a phenomenal experience,” McLaughlin said of those first jams. “But [record label] CBS, they all thought I was a bit crazy…but for me, it was an imperative that Shakti become my permanent group after the Mahavishnu Orchestra.” Now nearly 50 years later the two are ready to celebrate their fabled and globally influential meeting with a world tour.

For their return McLaughlin and Hussain will tour with Indian vocalist and composer Shankar Mahadevan, Selvaganesh Vinayakram (T.H. Vinayakram’s son) on percussion and Ganesh Rajagopalan on the violin to enthrall and inspire audiences across the globe. They’ve also announced they’ll release an album in celebration of the milestone.

“It’s really a thrill,” McLaughlin said of Shakti’s 50th-anniversary plans. “I’m delighted to be part of this marvelous tradition of the Shakti group.”

The rekindling of Shakti plans to honor the legacy of the original formation by acknowledging their tradition while continuing to push beyond existing boundaries just as the first group did – through musical conversation, exploration and communication.

“This group is everything that I could possibly imagine in a music offering,” said Hussain in a press release. “As far as I’m concerned, it is the pinnacle, the musical nirvana of my musical career.”

The album release date, tour schedules, supporting acts and special guests are expected to be shared in the coming months.