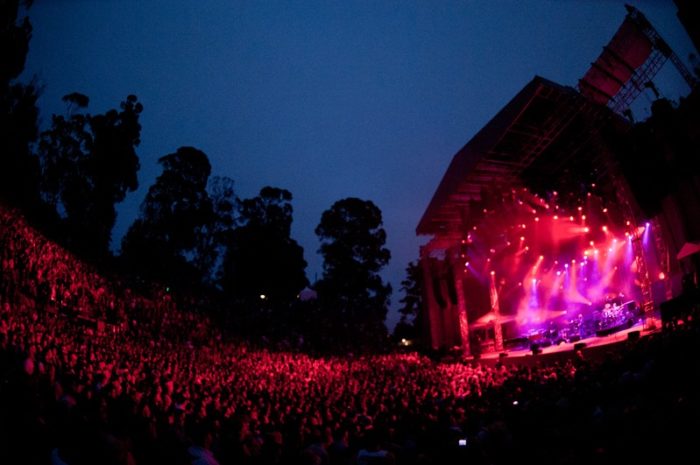 For this week’s installment of their Dinner And A Movie broadcast series, Phish will stream their Aug. 7, 2010 show from Berkeley, Calif.’s the Greek Theatre. The show was part of the band’s 2010 Summer Tour.

The featured recipes this week are ‘Greek Night’ themed, and come courtesy of the band’s staff member Betty Frost. “If you’ve ever sent a missive to Phish HQ, there’s a good chance you received a reply from the intrepid Betty Frost, who has worked for the band for over 25 years,” wrote the band in the announcement post. “Betty’s career with Phish began when she delivered a muffin basket to Mike Gordon’s accountant, and the rest is history. An avid amateur cook, Betty once handily won a pie-baking competition at Vermont’s Champlain Valley Fair. This week, Betty turns to some family recipes for a special ‘Greek Night’: Spanakopita, Lamb Meatballs and a Watermelon Salad.” Check out the full recipe in the post below.

The charity for this week is the Music Health Alliance. According to the band’s post: “Music Health Alliance provides access to healthcare with services that protect, direct and connect music professionals with medical and financial solutions. MHA’s vision is to create a safe and confidential place for the music community to gain the very best healthcare and health insurance solutions through defined and transparent advocacy services with an emphasis on the prevention of illness and overall wellness.” For more information, head to musichealthalliance.com.

The featured show itself is highlighted by some quality first-set jamming in “Gotta Jibboo” and a fantastic “Light” that emerges from set two’s opener, “Wilson.” Check out the full setlist below.