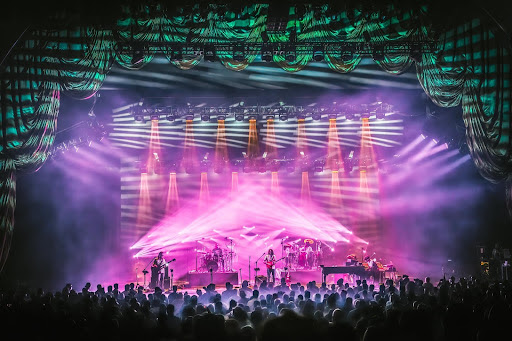 Today, Goose released the newest episode of their behind-the-scenes video series, Day of Show, highlighting their pair of sold-out shows at New York City’s Radio City Music Hall. The mini-documentary was shot and directed by Bryan Murphy and captures the Connecticut band’s intimate pre-show rituals, rehearsals, casual banter and effervescent excitement shared with close friends, family crew and fans leading up to the milestone weekend which coincided with the release of their critically acclaimed studio album, Dripfield.

This latest episode of Day of Show includes footage of both the performances (June 24 and 25), which featured one acoustic and two electric sets and sit-ins from Phish’s Trey Anastasio, Father John Misty, Stuart Bogie, Dave Nelson and Dripfield producer D. James Goodwin.

Since the recording of the joyous footage, Goose have continued to power through the summer with landmark festival sets, making stops at Peach Music Festival, High Sierra Music Festival, and most recently, Newport Folk Festival. Goose still have many nights ahead of them, including Sacred Rose in Chicago, Charleston, S.C.’s Resonance Music and Arts Festival, and their inaugural headling shows at Red Rocks Amphitheatre on Aug. 18 and Los Angeles Greek Theatre on Aug. 21.

Goose also recently detailed their upcoming fall tour, which will kick off at The National in Richmond, Va., on Sept. 29 and 30. From there, they’ll head to Atlanta for another two-night stay before heading west to St. Louis, then south for shows in New Orleans, Austin, Texas, Kansas City, Mo. and more. They’ll round out their tour by returning to Texas for a second go at Austin City Limits on Oct. 14-16 and a final show at the South Side Ballroom in Dallas on Oct. 15. See the full dates below.