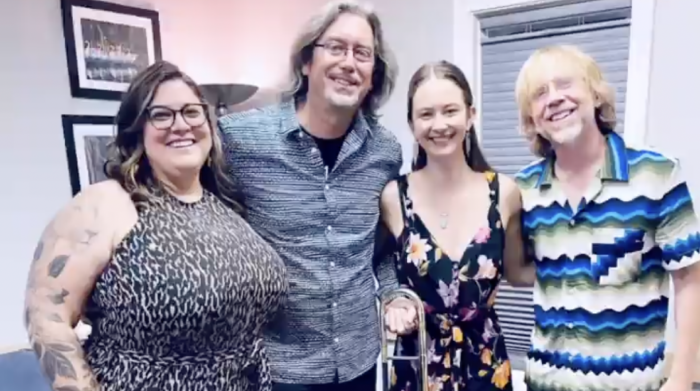 Photo via @JHartswick on IG

Trey Anastasio Band continued their late summer/early fall outing on Sept. 18, with yet another personnel swap in their brass section.

Cochemea Gastelum – who was tapped to fill in for saxophonist James Casey, who is battling cancer – was unable to make the gig due to a previous engagement opening for Antibalas at New York’s Central Park SummerStage.

Naturally, the band looked within for a substitute, and Jeff Cressman—father of T.A.B. trombonist Natalie Cressman, former member of TAB himself and longtime Santana sideman—rose to the occasion.

The band kicked the show off with “Shine” and moved through longtime favorites like “Cayman Review” and “Sand” before closing the half with “Push On ‘Til The Day.”

Fans were thrilled with the hard-rocking second set opener, “Carini,” and T.A.B. continued on with “Plasma,” “Pigtail,” “Alaska,” “Mozambique” and “Money Love and Change.”

They encored with a one-two punch of “Show of Life” and “About to Run.”

Check out the full setlist – via Phish.net – below:

Set I: Shine, Blaze On, Magilla, Cayman Review, Sand, Valentine, 46 Days, Push On ‘Til the Day

Enc: Show of Life, About to Run