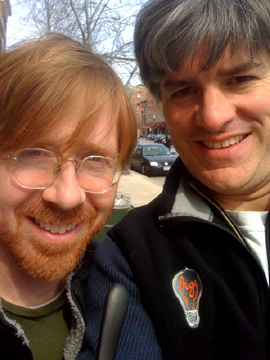 The following piece originally ran as two-parts in the Friday and Saturday Sunday editions of the Festival 8 Express.

Other than the fact that Phish has reunited in 2009, ending a 5-year second hiatus that saw their fan base continue to expand, there has been another welcome reunion this year. Trey Anastasio began working with his longtime writing partner, Tom Marshall once again, and together, in collaboration with the members of Phish, they have created their latest album, Joy. The Express sat down with the lyricist shortly before Festival 8 for a candid conversation about that reunion with the guitarist/singer/composer, and their work on Joy, as well as a look back at a few tracks that found their way onto Party Time, the Joy box bonus CD. As regards Joy, Marshall explains, “I see a lot of questions that you and I could clear up, or at least add to the mystery.” And so we open the door…

What was it like to reunite with Trey, to write again, and did that begin when you sent what would become the lyrics to “Backwards Down the Number Line” to him on his birthday, September 30, 2007?

It really did. That was it, really. I was estranged from him because the program he was in didn’t allow for a whole lot of communication. For many reasons, his family and others were sort of shielding information about him, even from those who thought they were pretty close to him. Part of that is the old…you know…if you’re starting a whole, new life, and a whole new lifestyle, you do have to give up some of the old stuff. I think, maybe, for a while there, I was considered part of the old stuff. (laughs) I didn’t want to be because I didn’t really have a whole lot to do with the bad stuff happening, and Trey realized that and recognized that, so I was put on some sort of approved list.

Prior to that, to break the silence, I got a hold of an e-mail address from him, just by talking to his Dad. Out of the blue, I realized it was his birthday. I reached across the gap of not knowing really what was up with him with that e-mail. Literally, it was a birthday wish. It was funny because he called back so fast. First, he wrote back, “Oh my God!” within two hours. I was like, “What does that mean?” (laughter)

Maybe three, four hours after I sent the e-mail, he played me the song. He called me, and he was laughing. He played me the song, and said, “Oh my God! This is so perfect. It just fell together so quickly.” I listened to it, and it’s just amazing. I have that version, and I want it to come out, and be made public. It’s so good. It’s so full of energy. The Phish version on Joy is amazing. I love it. But that very first one—there’s something that’s incredibly crispy and magical and wonderful about it.

Was it an acoustic version?

No. When Trey was living in Saratoga Springs [upstate New York], he had a nice

little mini-version of his studio, which he calls Rubber Jungle, in his apartment there, so

he was able to do full recordings.

From there, did he say that he was ready to start writing songs with you again?

Yeah, it took a while actually. That broke the ice, and then there was sort of a process. It, literally, was like…I don’t think anyone ever mentioned an approved list, but I sort of had that feeling: “Who can he talk to?” It was very strict at first—“Who can’t he talk to.” That settled in, and he began to know how to handle his appointments. He had a very rigorous daily schedule of meetings. Finally, he got a handle on that, and invited me up. After “Backwards Down the Numbers Line,” he wanted to start writing.

I came up there. He would have to make some appointments, and I would sit there in his place, but we just realized that we still had it. We had not written for three, four years, and it was just great. It was a reawakening—not even a reawakening, so much as a realization that we could still do this. It’s almost easier now because there’s not this sort of weird haze surrounding Trey, or between us, or whatever.

It was wonderful. I put pen to paper, again, and started typing lyrics. I went up there with the whole ream of things again. I realized that we had gotten older. Our style has changed and yet, we’re still laughing like the old days. It was a lot of fun, and we wrote a lot of songs. Even though seven songs I co-wrote got on Joy, I think we wrote about 20 songs.